A Closer Look at CARES, the Flight Safety Harness for Children 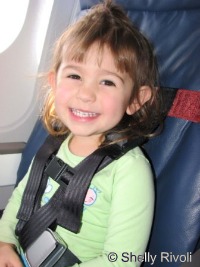 Obviously, I love traveling with my children. But even I will admit that one of the greatest challenges in traveling with a toddler can be managing the logistics, and bulk, of a toddler-sized car seat on top of any other travel gear, diaper bag, free-range Travel Teddy, and toddler. Fortunately, there are many ways to help ease travels with car seats. One of the newest products for families traveling by airplane is CARES, which stands for “Child Aviation Restraint System.”

Sweet Pea Baby Rentals, which rents CARES by mail to families anywhere in the U.S. or Canada, recently helped us test out CARES for ourselves with each of our daughters. Both girls are within the range of using CARES, and it was helpful to see the differences in using the product with each of them at 2 years apart.

Before I get into the details of our experience, here’s a quick overview of CARES for those who aren’t yet familiar with it: 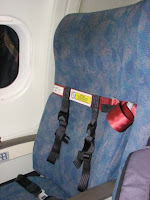 What is CARES?
CARES is an additional set of straps that fits over an airplane seat back and attaches to the standard seat belt. It converts the airplane’s lap belt into a 4-point harness securing the child against the airplane seat back, and is FAA-approved as an in-flight alternative to car seats. It weighs only 1 lb, and packs into a 6” stuff sack. CARES can be used in airplanes only, not in automobiles.

Who can use CARES?
CARES is approved for use by children who are at least one year old and weigh a minimum of 22 lbs. It can be used for children weighing up to 44 lbs. Children using CARES must have their own assigned seats on the aircraft.

When to use CARES:
The FAA has approved CARES for use during all phases of flying, including taxiing, take-off, and landing.

Where to use CARES:
Since CARES does not block the passage of others onboard the aircraft any more than an airplane seatbelt, CARES can be used in center and aisle seats, unlike car seats which can only be installed in window seats or the centermost seats of jumbo jets with two aisles. 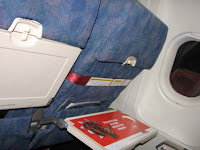 How to use CARES:Lower the tray table on the back side of the seat where you want to use CARES (explain to your rear neighbor if he’s already seated), and slip the red cinch strap around the seat back with the black straps hanging down, buckles facing outward. Slide the red strap down to where it is at or just above your child’s shoulders (or higher if necessary for the seat shape) and tighten this strap. Feed the airplane seatbelt through the loops at the lower ends of the two black CARES straps, and adjust their length as appropriate for your child. Fasten, and tighten the airplane’s safety belt around your child—and don’t forget to raise your neighbor’s tray table back into place! 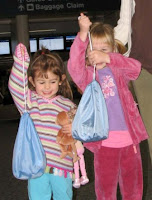 I’ve flown with babies, toddlers, and preschoolers in many different situations, and I’ve tried a lot of specialty gear first hand. That said, I know no single product out there will make travel hands-down easier for every family traveling with small children. Every family and child is different, and every trip can be just as different.

Traveling at 7 months pregnant this time around, with two children under the age of 5 years, I have to say that CARES was a tremendous help and convenience to us all. With each CARES harness stored in its small stuff sack and placed in each of our carry-ons (a diaper bag and a daypack), we were able to simply place our bags on the X-ray belt and proceed through security and the entire airport without any special effort.

On the first flight, we avoided preboarding, but then had to ask our neighbors behind us to let their trays down while we installed the main strap that goes around the seat. It wasn’t a big deal, but it’s easier to keep track of the toddler before the plane is crowded with passengers shuffling carry-on bags into the overhead bins. On the return flight, we took advantage of family preboarding and had a much more pleasant time getting the CARES harnesses and girls in their places before the rest of the overbooked flight boarded.

It’s not hard to install a CARES harness, and it really does only take a few minutes, but we found that the specific shape and even upholstery of the airplane seat can present some challenges (and it was different for us on each flight). For example, with an airplane seat that has sides curving forward from the back, it was easiest to install the main strap higher on the seat than at or just above the shoulders, as recommended. When it was placed lower and closer to the shoulders, the seat’s shape worked against it the red CARES strap would actually stick out from the seat center and kept sliding down. Moving it up higher did the trick and didn’t seem to be a problem for our 2-year-old. Leather (or faux…) is more slippery, so we needed to adjust the main belt much more snugly around the seat back than we did when flying with a fuzzy, upholstered seat. 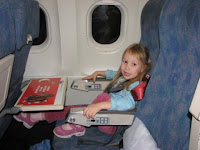 The main drawbacks we found were that neither girl could see out of her airplane window when seated on the grown-up airplane seat, as they might have been sitting in a car seat. This would have been a non-issue if they weren’t seated in window seats, hoping to look out. Also, when both girls were very tired and I hoped at least one would snooze, the straps did little to comfort or support them in that respect, whereas a car seat with deep sides and a slight recline might have aided in the nodding off. While it was also more difficult for both children to reach their trays (it was easiest on the first airplane, where the tray extended toward the seat), it also made it impossible for them to kick the seat infront of them (bonus!).

The real moment of truth came when we discovered our gate had changed to an entirely different wing of the Phoenix airport—and was supposedly already boarding. Countless people-movers later, exasperated from prodding on the two little girls and Traveling Teddy at a pregnant-lady and preschool pace, I was ever so thankful to have a 1 lb. CARES harness tucked in my diaper bag rather than the weight and bulk of a car seat.

Who could benefit most from CARES?

Families traveling with twins & multiples may not only enjoy the substantial lightening of their loads (flying minus two or more car seats), but they may also appreciate the greater flexibility in seating options onboard aircraft.

Pregnant travelers who have enough of a load as it is. Interestingly enough, Louise Stoll, the creator of CARES, first conceived the idea as she met her own daughter at the airport… who was traveling at 7 months pregnant and juggling a toddler and car seat. (Thanks Louise! You certainly had the right idea!)

Families renting or borrowing a car seat at their destination. It was quite liberating to travel so light and know our “vacation car seats” would be meeting us on the other end. And sure enough, we arrived at the airport’s rental car counter to find Sarah from Sweet Pea Baby Rentals standing by with the exact car seats I’d requested (on a luggage cart for us, no less!).

Families that must travel very light and may wish to also use the RideSafer Vest for their children in cars instead of a car seat.
Who might rather use a car seat?
If your child is an escape artist, understand that even with CARES he’ll have still have the airplane’s own easy-lift seat belt latch right in the middle of his lap. While the chest clip may still slow him down, the temptation to slip out (no crotch belt, remember) beneath it may become problematic with some children.
If you need your child to sleep very well and very long during the flight, you might consider your own comfort in the adult-size airplane seat, then look at his small body. His car seat may provide more comfort and support for the long haul.
If your child is already 40 lbs or more, and large enough to use a backless safety booster in cars, keep in mind that children who meet the 40 lbs. + and 40” + tall and no longer need standard car seats are considered by the FAA to be safe in airplane lap seat belts alone.
Three ways to get CARES for your kid: 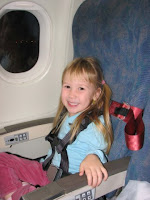 Childproofing Somebody Else’s Home for the Holidays

Best Holiday Travel Moments with Children: Win a Gift-wrapped, Signed Book to be Mailed Next Week

Fifteen Tips for Flying Alone with a Baby...

Five Things You Should Know Before Flying with...

Tips for packing excess liquids for flights with...

What to Pack in Your Baby Travel Kit...

Need to Know: Flying Alaska Airlines with a...

Need to Know: Flying Ryanair with a baby...

Need to Know: Flying China Airlines with a...