Home baby gear How to bike with a baby or toddler, plus a "little kid"
baby gearbikingfamily traveltoddler

How to bike with a baby or toddler, plus a "little kid" 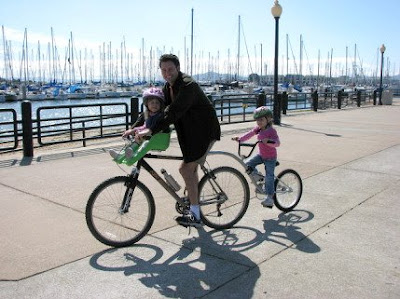 I won’t claim to be much of a cycling enthusiast myself, but the grand times our family had biking around Yosemite last fall were enough to put “biking with kids” high on my list of favorite family outings. Here along the Bay Shore Trail, we also have great biking with the kids from the scenic Richmond Marina down to the always entertaining dog park at Point Isabel. Once you have the bikes, it also leads to numerous free (or at least inexpensive) family outings packed with fresh air, exercise, and let’s face it—fun.

But how do you make the transition from baby-to-toddler to bike-riding kid beside you? Bike trailers can be great, even offering shelter from wind, unexpected rains, and leaves on the wind. Many can also serve double-duty as strollers

, which is especially great if you’ll travel with your bikes (folding flat, they may even take up less space in the trunk than a stroller). But unless you find a great deal on one at a garage sale or on Craigslist (and plenty of people I know have), bike trailers are quite expensive. They also won’t help your child develop balance or confidence on your rides.

Knowing we had number 3 on the way, and that mom (that’s me) would eventually spend another year pushing the stroller until the new baby was bicycle-worthy, we came up with this combination which works great and the girls absolutely love. It’s also helped our big girl work on her riding skills a bit and given her a new level of confidence about riding bikes in general.

). Having a front-mountable seat for your baby or toddler not only helps you enjoy the ride together, but makes the bike feel more stable for the grown up and it’s certainly easier to load and unload. It’s also a less bumpy ride for your child sitting over the front wheel rather than the rear. But most important, in our case: it also allows you to attach a trail-a-bike on the back.

Interested? Since children are constantly outgrowing bike seats, bike trailers, and trailer bikes, just as they are constantly growing into them, I suggest you first take a look at your local Craigslist and classified ads to see what bargains you might find. Some other front-mounted child seats include the WeeRide Kangaroo and the Bingo by Kettler. Trail-a-bikes are also sometimes called “trailer bikes,” which can get confusing with the number of bike trailers that will also turn up in online searches. Some to watch for include the InStep bike trailer, Adams Trail-a-bike, the WeeRide Co-Pilot bike trailer

I’ll miss biking along side of these guys this summer, though they’ve already had plenty of fun biking by the San Francisco Bay and along the American River without me. But just think, next year? We’ll have a new froggie riding up front, a new big girl taking her place on the trail-a-bike, and my Angelina… free range on her own bike.

By the way, if you think this looks like quite a line up, imagine our surprise when we came across another family biking at Yosemite with four in a row. Dad and daughter pedaled a tandem bike

outfitted with a baby seat like this up front and a trail-a-bike behind. Judging by the enormous smiles on their faces, it was clear that the family that bikes together… has great vacations together.

This post is part of Photo Friday over at DeliciousBaby.com. Head over there for more travel inspiration and ideas, and don’t miss the two latest interviews in my series Moms Around the World: Cody, Wyoming and Nairobi, Kenya. (Click the pushpins on my cool new map.)

The Ultimate Guide for Planning Trips with Babies, Toddlers, and Preschool-Age Children

Join me on the radio this Saturday