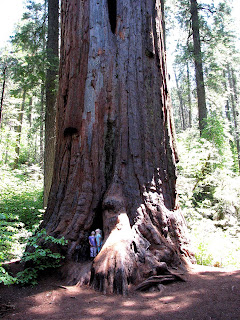 To complete our Eastern Sierra road trip, I felt it was only natural that we should call upon one of my favorite parks, which we would be “practically passing right by” on our way home, if we just took the Sonora Pass (Hwy 108) and drove a little way north. Famous last words. I remember hearing once that if you could take all the blood vessels and veins in the human body and lay them end-to-end, they could wrap around the earth nearly three times. I’m not sure if that’s true, but as we wound and wound around the hairpin curves of the highway I got the feeling you could pull it off with Highway 108.

Nevertheless, we were all quite pleased to see our “Big Trees” the following day. As you can see, they don’t disappoint. The largest tree in the park is the Aggasiz Tree in the South grove, which is 25 feet in diameter (yes, in diameter) at 6 feet above the ground. But anyone making their first trip to Big Trees, especially with children, should head directly to the North Grove, which is where the story of Big Trees begins.

In 1852, a man was tracking a wounded bear through the area when he suddenly came across what is now called the “Discovery Tree,” a slight misnomer considering what you’ll discover there now. Being 1852 and in the middle of the wilderness, there was really only one thing to do with such a discovery. So five men spent 22 days cutting down the giant so that sections of bark and a portion of its trunk could be sent as far as New York City (by way of Cape Horn) to be put on display. The exhibit was considered a flop, and the lesson to be learned from it was that those who were truly interested wanted to come to Calaveras to see the real trees for themselves, as they still do today. 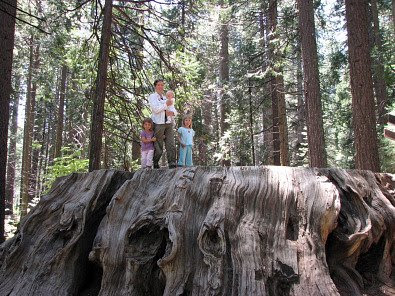 It’s hard not to get goose bumps as you stand atop the massive stump that remains from the Discovery Tree, which marks the beginning of the North Grove trail. After climbing the stairs up to the top, you’ll see that a handful of minivans could be parked across the surface (thankfully they’re not). Don’t be surprised if you see a troop of Boy Scouts atop the stump as you arrive—but don’t be shy, there will still be room for your family to join them up there.

The North Grove trail is a level, 1.5-mile walk between giant sequoias and massive coast redwoods. Though the distance sounds short and the trail is actually wheelchair accessible, don’t be surprised (as we were) if it takes you 2 hours to complete the loop with small kids. If you’re exploring the loop with a baby or toddler, you might want to bring your stroller along, especially if you have the all-terrain or jogging variety, so that you can load up with plenty of water and snacks for everyone and avoid carrying your tired-out toddler the last half of the loop. 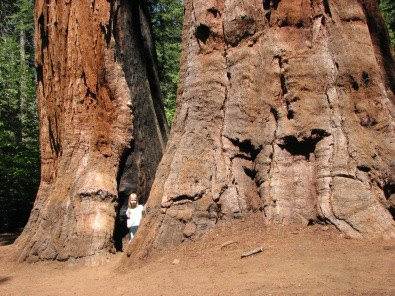 Before you start down the trail, be sure to use the restrooms at the parking lot since there won’t be any along the trail, and pick up your 50 cent guide to the trees that may be in a box at the trailhead and is also available at the Visitor Center. There are expensive bottles of water and sodas in a machine near the Visitor Center, but that’s it for food or drink. So bring your picnic, beverages of choice, and plenty of drinking water.

Highlights of the North Grove include the Empire State Tree, which is the largest in the North Grove with an 18-foot diameter; the Three Graces; and the “tunnel tree” that lies alongside the trail and even adults can walk through the interior of with stairs steps up from one end—your kids may need to spend a bit of time at this one. Don’t forget your camera. 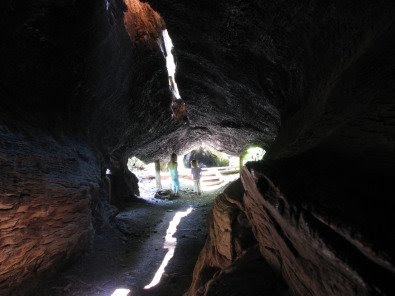 After your walk through the North Grove, enjoy your picnic in the area adjacent to the parking lot, or venture farther into the park and check out the picnicking areas along the river. If you come in late spring or early summer, you may catch the Pacific dogwoods in bloom, which flourish here beneath the giants. There are several varieties of California wildflowers as well. In fall, you may be dazzled by the color of the changing leaves, usually best in late October. If you like cross-country skiing, you might check out the North Grove in winter.

The Road to Bodie

Stop the presses: I just took the bronze!