Picnic at the Palace of Fine Arts, San Francisco 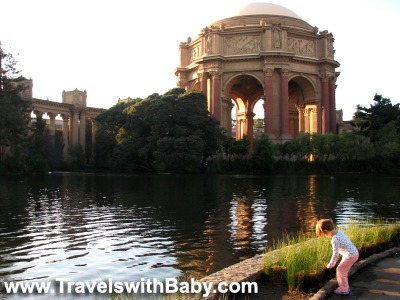 This post is part of my “Cheap and Free San Francisco” series.

Just between the dazzling Romantic Revival homes of San Francisco’s Marina District and the entrance to the Golden Gate Bridge lies what I consider to be one of the wonders of the modern world: The San Francisco Palace of Fine Arts. It is also one of my favorite admission-free places I recommend to anyone visiting San Francisco. 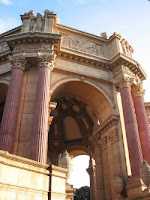 The sheer scale of its columns and landmark rotunda feel completely other-worldly given the compact architecture that characterizes most of the city around it, but that the Palace of Fine Arts still stands at all is a wonder—and an interesting story in itself. Originally built as part of San Francisco’s 1915 Pan-Pacific Exposition, the Palace of Fine Arts was, like all of the spectacular structures created for the event, not built to last.

Burning Man is one thing (which coincidentally got its start within a mile of this site), but when you take a look at these stereoscope images of the fountains and structures created to stand only 1 to 2 years, it nearly breaks the heart. Granted, San Francisco has its charms, but who among us wouldn’t love to linger in this West Coast Paris that was? 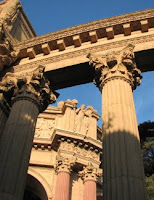 Ironically, the Palace’s architect had originally planned this stunning entrance to the Impressionist art exhibit to mimic an ancient ruin, complete with semi-obscuring vines and shrubs that were never added. And because residents fought hard to keep the structure after the event (during which time the building housed tennis courts, army jeeps…), the Palace eventually fell into inevitable disrepair. By the early 1960s, it was literally falling apart, in ruin. 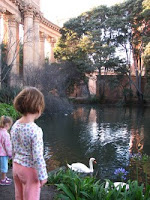 As you might expect, a movement was already underway to help save the Palace of Fine Arts. Though it cost ten times more than the original construction, the Palace of Fine Arts was demolished—and rebuilt in concrete. Strolling the grounds today, and watching my children chasing each other through the colonnade before stalking swans in its lagoon, the Palace grounds feel as ancient and grand as some spectacles I’ve visited in Europe.

Suffice to say, this is one heck of a place to picnic. It’s also a favorite with San Franciscan joggers, dog walkers, and wedding photographers. Though the main building at the back is home to the Exploratorium science museum (admission required), the Palace of Fine Arts grounds themselves are open and free to the public.

By public transportation, you can arrive with Muni buses #28, #30, and #43. From Montgomery BART downtown (at 3rd St. / Stockton) or Fisherman’s Wharf, you can take the #30 Stockton bus to the Palace of Fine Arts. You can plan your trip online at the Transit 511 site.

By car, you can follow the directions here. The Palace of Fine Arts is part of the San Francisco Scenic 49-mile Drive, so you can get some help from the signs along the way. Arrive early if you hope to get good street parking, or use the Exploratorium’s free parking lot if you’ll also be visiting the science museum. 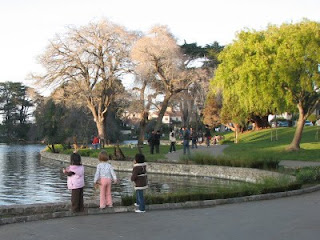 This post is part of the Photo Friday fun over at DeliciousBaby.com, where Debbie explains what bowling shoes have to do with Golden Gate Park.

Vancouver with kids: Tips from a local mom in the know

Go Dutch in Golden Gate Park with a...

To the Lighthouse: Point Bonita