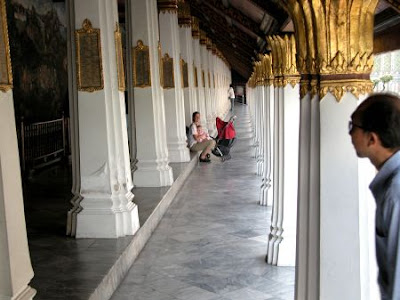 This post is in honor of World Breastfeeding Awareness Month.

So as you can see, I’m not actually breastfeeding at the moment this photo was snapped, though I desperately wanted to be. It pretty clearly captures the challenge I was having this day, finding a quiet place to sit down and nurse my baby while visiting the large and majestic Royal Palace with Wat Phrakaew in Bangkok. It was hot. Really hot. There were few places to sit down, let alone places where you wouldn’t be so visible as to draw a large crowd of some of Earth’s most baby-loving people, the Thais. With a fair-skinned, strawberry blond baby, in tow, we especially stood out.

Well-meaning strangers wanted, and even needed, to see this child, from the orange-robed monks leaving the Temple of the Emerald Buddha to the janitor sweeping the back corridor. They had songs she apparently needed to hear, she had feet that apparently needed to be tickled. We had about 4 to 6 hours worth of exploring to do at the compound, and the normally simple act of feeding my baby became an exhausting quest to escape these extremely friendly people. She was 7 months old, highly distractible and, as you might guess, increasingly fussy.

As time went by and repeat attempts were made, including while leaning against a less-than-comfortable cement wall, I began to suspect I was a little too discrete in my method. As soon as she’d latch on, someone would approach us smiling and assuming that the baby was asleep, hoping to get a look at her. This was awkward. When visiting other people’s countries, I always try to be a good guest. I would no more flash the goods than wear shoes into someone’s house, or visit their temples with bare shoulders.

Still, it became clear to me that, as fascinated as these people were by the Western baby, it was not even on the radar that I might be trying to breastfeed. I took this up with a couple of ladies who worked at our hotel and wanted to talk babies, and again later when I had another mom-to-mom discussion as we traveled. They were shocked to learn that I, an American woman who could afford to travel the world, would choose to breastfeed my baby.

I am currently breastfeeding my third baby, and I know that overall breastfeeding has greatly simplified our travels with babies. Thanks to the nifty magic of white blood cells getting transferred from me to my babies through the milk, it has also provided extra protection for my children against viruses I’ve been exposed to along the way—something of a comfort for anyone who has to travel with their baby in flu season. As we have traveled in extreme heat, it’s also been reassuring to know that my milk is better and more easily absorbed by my baby than even water would be.

I have been impressed with how breastfeeding awareness and support have grown around the globe since I was breastfeeding my first baby 5 years ago. To find out more about World Breastfeeding Week, visit the World Alliance for Breastfeeding Action online at www.waba.org. If you’d like to learn more about the current status of breastfeeding in some global destinations, including Kenya, South Africa, Australia, Germany, Brazil, and Canada, and what you might expect if planning travel there with your breastfed baby, check out my recent interviews with “Moms Around the World.”

Shelly Rivoli, author of the award-winning guide Travels with Baby
travelswithbaby.com
Note: This post is part of Photo Friday at DeliciousBaby.com

Magic moments when (and where) you least expect them

Paris: The 5 Best with Kids Under 5

Amsterdam: 5 Best with Kids Under 5

Nicoya Peninsula’s 5 Best with Kids Under 5...