An Ode to the Nye Beach Chowder Bowl 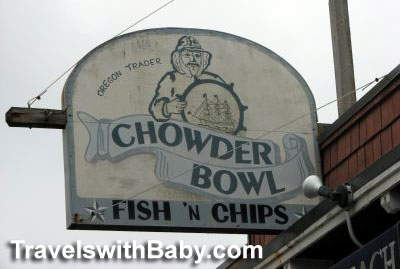 NEWPORT, ORGEON: The Nye Beach Chowder Bowl – Those who followed our Oregon road trip last summer may remember my post about visiting the Oregon Aquarium at Newport. In my enthusiasm for Newport and the Oregon Coast in general, I included several suggestions for other things to do, eat, and see for those of you who might make it to the area yourselves. Included, was this mention of clam chowder—something you simply must eat to complete any trip to the Oregon Coast:

“If you’re not in the mood to do your own cooking, I recommend The Whale’s Tale here on the Bayfront for breakfast and Mo’s Annex with its Yaquina Bay view tables (across the street from the original Mo’s) for a filling budget lunch of clam chowder and garlic cheese bread (they’ve got hotdogs and other kid-pleasers, too). However, my mother, who has been eating Oregon coast clam chowder since childhood, will tell you the best “restaurant chowder” to be had is at The Chowder Bowl down at Nye Beach. (For the best clam chowder, however, you’d have to follow my great grandma’s recipe.)”

This year, I’m happy to report that, showing true journalistic integrity on the subject, I managed to eat clam chowder at both Mo’s (at Lincoln City) and The Chowder Bowl. Which not only goes to prove that you—or at least I—can never eat too much clam chowder at the coast, but that sure enough, my mother was right.

It’s not to say that Mo’s clam chowder isn’t perfectly adequate, or that the grilled cheese sandwiches and fries served on a Frisbee don’t charm the kids, or that I don’t enjoy stuffing cracker wrappers and mussel shells into a plastic bucket (really, I do!). But from the first moment our waitress sat my Chowder Bowl down before me, I could actually see the difference. “Grab the camera!” I shouted to Tim. The first touch of chowder to tongue was something like a hug from my long-past great grandmother who once cooked up her own marvelous chowder for us just a few blocks from Nye Beach, where we sat. 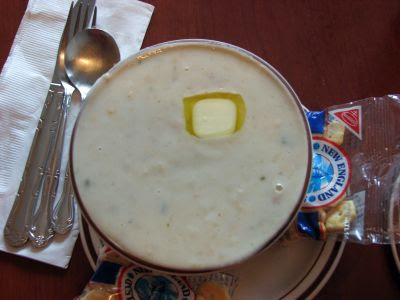 It was, without question, the real deal. I’m not sure I’ve ever been emotionally moved by soup before, but so great is this chowder and the entire Chowder Bowl experience (from sidewalk wait clear through the bread pudding with surprisingly “hard sauce”), that I felt compelled to write an ode to the Chowder Bowl. I’ll warn you that this is the first poem I’ve published in a very long time (since before I started wearing this ring on my hand, and changed my name)—and now you might see why. Nevertheless, I’m a sucker for great chowder. Cue bongos, please:

But locals seek a higher goal,”

While visitors settle for Frisbees and caps,

They head to the Chowder Bowl.

No place on Newport’s Oregon Coast

I’d rather drop a twenty. 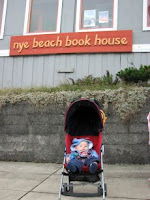 For other helpful tips for visiting Newport, including some of the history of Newport’s revived Nye Beach neighborhood, be sure to check out my post on the Oregon Coast Aquarium. And for a great family-friendly resort just up the road from Newport, don’t miss my review of Salishan Spa and Golf Resort.

A Walk on the Beach at Salishan

Italy, September 11th, and why we travel anyway

You hit the nail on the head with this article! I am a native Oregonian and I agree with you 100% that Mo's is overrated and the Chowder Bowl's clam chowder basically puts you in a trance!
As a matter of fact, I'm such a big Chowder Bowl fan, that I even met a stranger on a plane home from the Midwest one time, and after finding out he was moving to Oregon from Nebraska, quickly told him that on his first trip to the Oregon Coast, he MUST try the clam chowder at Chowder Bowl!! He is now addicted too! 🙂 IMHO, the best comfort food hands down!

I love clam chowder, and this looks fabulous!
I'm smack dab between the two coasts, and a lot of clam chowder here seems an overly glumpy with flour affair and short on the clams.

Oh my god, this place sounds heavenly and the chowder…
I haven't had chowder in ages. I am so overdo. But since it's not possible to buy it here, I will have to make it!

Oh my gosh I am drooling for some chowder even though its about 95 outside.

I'm from the East Coast and I know exactly what you're talking about!

OMG, don't get me started on fish 'n chips — for the right plate (true cod, please) I could write a ballad. 😉 Given the timing of the meal and the budget for the trip, the bowl of chowder was just the thing.

Love clam chowder, but the long lost Brit in me was more drawn to the promise of Fish and Chips. Now that's a sign you just don't see often enough in the USA, if you ask me!

This makes me want to try clam chowder, it's something I avoid usually, but the photo does look yummy.