Home train travel How can Amtrak get families on board—including yours?
train travel

How can Amtrak get families on board—including yours? 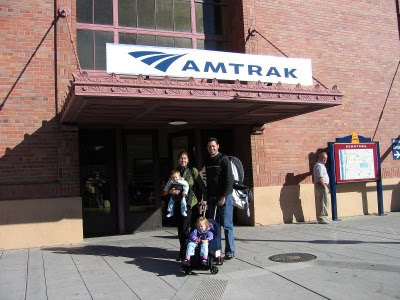 Last weekend, as my one-car family came out of its post-flu haze, I was inspired to hop aboard Amtrak’s Capitol Corridor line with my youngest for a day trip to visit relatives in Sacramento. It’s a trip our family’s made several times in the past, now complicated by the fact that we have too many people to fit in Grandma’s car—or even a regular taxi from the station—on the other end. Yet with one wee babe, I figured it would be a perfect escape for us.

Now I realize that airfares, BART fares, and bus fares—not to mention the cost of milk and postage—have all been on the rise, but seeing a roundtrip adult ticket price of $44 from the East Bay to Sacramento stopped me in my tracks. Let’s be clear:

And the distance I’d hoped to walk from the station if the weather was fair would have been an additional cab fare if it wasn’t. As I sat staring at my fare quote on Amtrak.com, feeling the full gravity of its implications, I suddenly noticed an optional add-on toward the bottom of the screen—what they had labeled a “deal.” In addition to my $44 roundtrip train fare, I could reserve a Hertz rental car on the other end for a mere $39.50 daily rate. 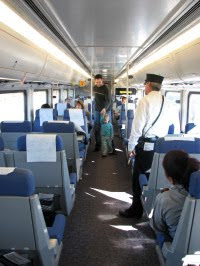 Please understand that my purpose in making this post is not simply to rant. Truth is, my heart is breaking over this. As I’ve mentioned before, rail trips have held a special place in my heart since I was young. In fact, I insisted on including the section on Travels by Train in Travels with Baby because I know how great rail travel can be—in the U.S. and abroad, especially when traveling with babies and young children. It can be an ideal mode of transport for families in certain situations, as illustrated in Part 6 of the book. I’ve wanted to help get more families on board our U.S. rail system, where possible, and this post is intended to be one more attempt at doing so.

Furthermore, in these difficult economic times, I think it’s more important than ever that we have affordable long-distance alternatives to travel by airplane and shorter-distance alternatives for driving. For example, if a person is willing to spend 51 hours to get from San Francisco (EMY) to Chicago riding in a coach seat (with no meals included, no sleeper compartment), I think it should cost less than an airplane ticket to travel the same distance in a few hours—don’t you?

For the same dates in February, for travel from San Francisco to Chicago, I found: 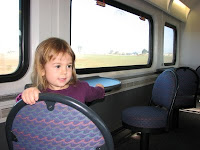 Of course, this doesn’t count baggage fees, which have yet to be imposed upon rail passengers and would apply to the air traveler. And children 2 to 15 years can ride Amtrak for half this price, whereas the domestic airlines gave up child discounts long ago. So if you have 104 hours to spend in coach seats with your children, this route may actually save you all some money as a family over flying. You should note, however, that according to Mapquest you could drive the distance in 31 hours.

But government agencies are stuck between rocks, hard places, and hard decisions all over the U.S. these days. Amtrak, which I realize is far more popular (and useful) on the East Coast than it is where I reside on the West, has continued to hike its fares with reason. And across much of the country, ridership has dwindled down to a precious few who can afford the novelty of a rail journey in the U.S. (where sleeper accommodations cost an additional $100-$400 per night) and those who have no other choice but to suck it up in lieu of driving.

So what can Amtrak do to get more families on board—including yours?

1. How about a second class sleeper option? As I suggest in Travels with Baby, a second class sleeper option would probably have far greater appeal for traveling families than the current sleeper option, which is an automatic first class meal-inclusive (and bottled water, towels for the shower, etc.) upgrade. I share the example of a “Family Sleeper” compartment adding an extra $462 to the family’s passenger fare for an overnight trip from San Francisco to Portland, OR—just one night, and you’ll have to share the bathroom with your fellow passengers. Still, you can probably have filet mignon in the dining car at no extra cost (bwah!). But if you’re like me, packed sandwiches and snacks from home would be well worth an extra $250 in you pocket. At least.

2. What if more kids could ride free? With base ticket prices as high as they are now, it’s hard to argue the case for even a day trip by train for a family of four or more. Perhaps if the infant discount could be extended to allow all children up to 4 or even 6 years to ride free, as is the case in European countries, it would help give Amtrak an edge over airlines that offer free lap child travel up to 24 months—and is not nearly as safe as traveling car-seat-free by train.

3. Your thoughts here? What would it take to get your family onboard Amtrak? Would either of these options help tempt you to take the train? Have you wanted to try a U.S. Rail trip with your children, but held back for some reason? Are you one of the lucky ones who lives in a place where rail works well? Do you have a favorite Amtrak route?

Ask Shelly: Flying to Mexico with a baby in his own airplane seat—without a car seat?

Taking the train overnight with a baby (FREE...

Give Thanks for Train Travel with Children