How a horse helped me be a better parent… and traveler 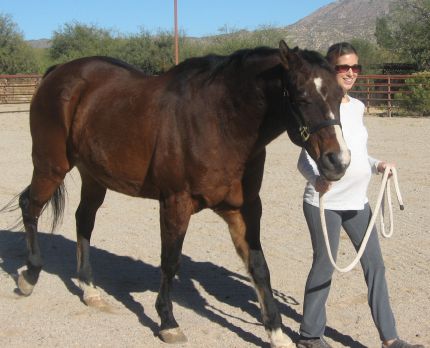 “From now on, I won’t be able to hear a parent, or grandparent, or flight attendant describe children this way without also hearing the title of Wyatt Webb’s book echo in my mind…”

During my recent “Mommymoon at Miraval” in Tucson, I had the chance to try their unique program called The Equine Experience, where guests work with horses—not in the usual trail riding capacity you might expect at a spa and resort, but in a series of exercises that help you better understand yourself and your own behavior patterns. After lunch, I boarded a van with a handful of other Miraval guests to head out to the horses, where I had the honor of meeting the legendary founder of the program himself, Wyatt Webb.After seeing the segment on Wyatt and the Equine Experience that aired on Oprah, I was quite fascinated by the first exercise alone, where you must get a horse to lift its hoof for you to clean it. I’ll admit right here, having learned to clean horse’s hoofs in my childhood, I wasn’t sure this would be too much of a challenge for me. As it happened, I got my horse to lift his hoof on the first try, using the same technique I’d learned as a child long ago at horse camp—lean in and shove. I was quite proud for a moment there, leaning and holding and hoping that Wyatt Webb would see my success when—whoops!Down came the hoof.

I looked up and sure enough, Mr. Webb had seen my “success” as I so much wanted to call it. He was grinning from one side of his cowboy hat brim to the other. He kindly advised me not to force the horse like that, but I thought that he was crazy. After all, I got the hoof up on my first try. For a moment.

I went back to it, and the very sensible horse (they call it “horse sense” for a reason) was more careful this time not to let me set him off balance. He stood with all the certainty and purpose a 1,000 lb. animal should, and there was no moving him. I realized right away that most of us would do the same thing to a stranger who walked up to us and behaved as I had. More importantly, I realized for the first time in my life that I had to learn how to work with the horse. It wasn’t enough to know what it should do, or even how to make it do what I needed it to—that was only a temporary fix. I might get him to lift the hoof once, but then… and suddenly I had to chuckle and give my horse a pat of respect. How different was he from my toddler?

Once I’d made this connection, and a few dozen others from sticky moments in my past, it wasn’t too long before I was able to lift the horse’s hoofs with his cooperation—or perhaps I should say he began lifting his hoofs for me when requested.

It reminded me of how often I hear parents recounting travel with their babies and small children, simply stating that a child is “an easy traveler” or “not a good traveler,” depending on how things went. (I can tell you right now that if we’d given up on our daughter after her first really difficult flight we all would have seen much less of the world, and Travels with Baby might never have been written.) From now on, I won’t be able to hear a parent, or grandparent, or flight attendant describe children this way without also hearing the title of Wyatt Webb’s book, It’s Not About the Horse. 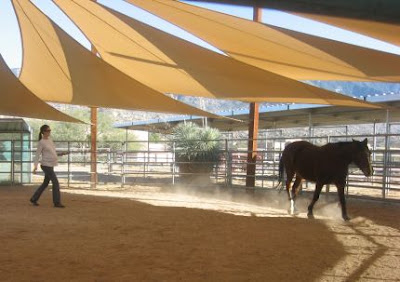 My most significant lesson of the day came later that afternoon when Carolyn of the Equine Experience led us to what they call the “round pen.” I’d heard the explanation that we would learn to direct a horse around a pen, make it stop and run at will, all without touching it or speaking to it. As I’d demonstrated earlier, I’m not exactly a horse whisperer. I doubted the others in my group from their various backgrounds and hometowns across the country were either. Yet soon enough the first member of group in the pen had the horse’s full attention, and sure enough the horse was watching and moving at will to her silent commands.

Each person seemed to form their own connection with the horse, and you could see that same horse actually moving and responding differently to each one. I watched, mesmerized, and feeling swept up in some sort of new reality where Jedi Knights, the Karate Kid, and Annie Oakley might all meet for lunch. And then it was my turn.“Use The Force,” I chuckled to myself, but then I reached back for that feeling of intention and clarity that had worked for me in the earlier exercise with the hoof. The horse began to move–and in the direction I’d wanted it to. I could feel an invisible ribbon of energy between us, from my center to his hindquarters, nudging him gently in the direction I wanted him to go. But when it came time to change directions, I had to start all over again. Of course I was feeling a little self-conscious, mostly self-critical since this hadn’t happened with anyone else in our group who stepped in there with the same horse. At one point, I literally lost my footing. As soon as I’d get the horse moving again, things were great. I could even get him to speed up and slow to a calm walk, but then… it all fell apart every time I tried to get him to change directions.

Afterward, we regrouped with Wyatt to reflect on the afternoon and most especially what we had learned in the final exercise at the round pen. I had to laugh as I volunteered that, “Apparently I have trouble changing directions,” which seemed the obvious metaphor, though I knew that was never the case with me. I continued explaining that it couldn’t be right though because of all the people I know I have the least trouble changing directions, that I can change directions and activities so well and so quickly that it’s almost a fault with me, and that I’m usually the one who gets frustrated because too often it feels like the other people near me can’t change directions fast enough.

Wyatt gave a thoughtful smile and said, “Well let me ask you something… when you decided it was time to change directions, were you crowding the horse?” There was no denying it. Each and every time I’d had to start over, I’d also had to step back (and back and back) to the center of the pen and realign myself with the horse. “Yep,” I grinned.

And there you had it: therapy the cowboy way.

My fast-adapting temperament has served me well in many situations in my life, and I’ve always thought of it as one of my greatest strengths. Yet it’s often left me at odds with my husband who admits first and foremost that he doesn’t often like change, and with my young children who like to see the world one drinking fountain at a time. But more often than not, I’ve seen our differences help bring out the best in each other. Particularly when I give them the space they need, both physically and mentally, for the inevitable transitions between daily activities in our home life, and between the various phases of adventures as we travel. Since loading up for our departure from Tucson, and at least a dozen times since our return home, I often find myself taking a breath and sighing to my inner Jedi,”

My lessons, of course, were unique among my group at Miraval. Everyone seemed to leave the horses with their own new insights imbued with that thing we grown-up people so often lack: horse sense.

If you make it to Miraval, I hope you’ll try The Equine Experience, which is offered as a 2.5-hour session and available for sign up after your arrival (see the current schedule here). For those who really want to dig deep, or have already enjoyed the Equine Experience, there is an Equine Experience Intensive offered certain dates where you can spend 6 hours a day, for 3 days straight, working with Wyatt Webb. 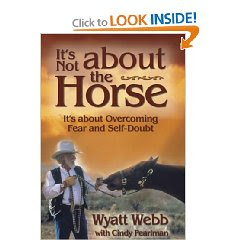 If you can’t make it to Miraval, check out Wyatt Webb’s book It’s Not About the Horse , co-authored by Cindy Pearlman. You might also be interested in another book he’s written called What To Do When You Don’t Know What To Do: Common Horse Sense.

Before I sign off, I must thank Cathy Gilbert (mom of 5, entrepreneur, and definite inspiration) for snapping these pictures of me during my Miraval Equine Experience. I should also add that the good people at Miraval mentioned that they don’t very often have pregnant ladies request to work with the horses and that I should be aware that there is always some amount of risk involved when working with large animals. I appreciated their concern for my safety and I didn’t attempt anything I wasn’t very comfortable with—or wouldn’t love to try again next time I get the chance!

Ask Shelly: Advice for flying to India with a 2-year-old

My Mommymoon at Miraval Spa and Resort

Fantastic post! I stumbled upon your blog while researching Wyatt Webb for a magazine article I'm writing. It wounds like a great deal of fun and very enlightening to boot. Thank you.