Ashland: A most unlikely duet 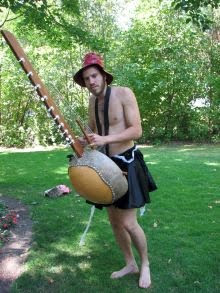 The nice thing about traveling is the interesting people you are likely to meet along the way, sometimes even where you least expect it. Take, for example, this budding young musician that Baby Theo and I intercepted during a pit stop at the postcard-perfect Lithia Park in Ashland, Oregon.
It’s not every day that I stumble upon someone wearing the lower half of a French maid’s uniform and toting one of these puppies barefoot through a park (even in San Francisco). Naturally, I had to stop and ask him about his large instrument.
He was flattered, if not a little alarmed, to have a baby-toting mama stop and ask him about his musical pursuits there on the grass, and he agreed I could take some photos of him with this West African harp of some sort. The traveler in me was a little disappointed to learn he hadn’t himself picked it up in Africa, but rather on trade somewhere there in town. Nevertheless, he began to play and played quite well.
I promised to return with the rest of my group, which had been exhausting itself on the fabulous Lithia Park playground that is an ideal road stop for any family with small kids traversing I-5 through southern Oregon. When we got back, a nicely dressed gentleman with a cello case was discussing the possibility of a duet, which had me nearly laughing out loud—yet a few minutes later the cello was tuned, nods were given, and the music began. 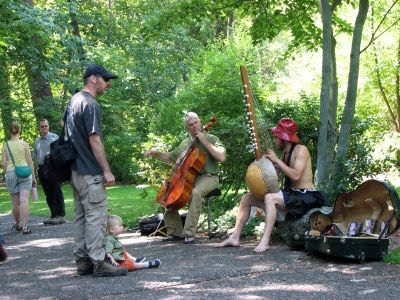 There was some uncertainty at the outset, a certain finding of a common plane, but in a matter of moments, there was no question that a duet was in progress. I turned to Angelina and asked her what did she think the music sounded like? She thought a moment, then whispered, “Maybe rain drops, and some angels dancing on top of the clouds.”
It was unexpected, and lovely. Just the kind of thing a traveler hopes to stumble onto in the world.
This post is part of the Photo Friday fun at DeliciousBaby.com. Head over there for more travel photos and inspiration.
Gentle reminder: There’s still time to enter my CARES flight harness giveaway. Check here for the winner to be announced Wednesday, October 21st—and more great “Gear up for Holiday Travel” giveaways coming up.
Safe journey,
Shelly Rivoli, author of the award-winning guide Travels with Baby

The Ultimate Guide for Planning Trips with Babies, Toddlers, and Preschool-Age Childrentravelswithbaby.com

Pack This! A poetry audiobook that’s prime for...