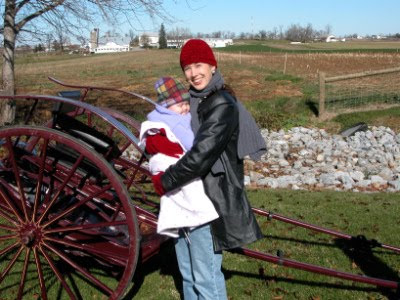 Although on any given weekday I may be spotted around town without a stitch of make-up, my hair swept back in a stark Kelly McGillis / Witness twist, I assure you I like zippers, snaps and lip gloss as much as anyone. Nevertheless, I had one of my most significant a-ha travel moments in, of all places, Amish Country. (Those of you who commented on my “eyes on the scenery, not the screen-ery” 2010 resolution will especially appreciate this.)

You see, technology has been trying to travel with us since before my husband and I had children, well before. In a nutshell, he is by career one of those techno-computer types with a lot of responsibility on his shoulders to help keep things running smoothly and securely for a whole ‘lotta people. It’s a great job and we’re very glad that he has it, though naturally it’s the kind where you can use a break once in a while. However, thanks to technology, what once was known as a “vacation” in the U.S. has for many been replaced by some sort of extended-leash reduced-hours work-from-afar scheme, seeming all the more reasonable because of expanded cellular coverage around the globe, and hotels and airports boasting wi-fi access wherever you turn. Going offline completely would now be, for many, irresponsible. 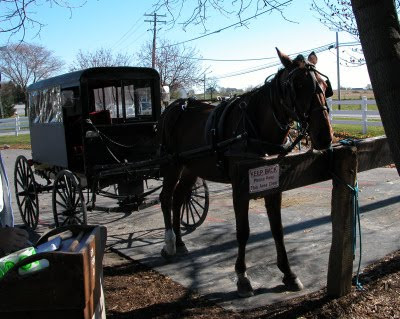 On our first trips out of the country as a couple, I secretly reveled in the fact that not only were we having a grand adventure—but one where his work life couldn’t reach us by cell phone. We were really on our own in the world. Do you remember the days when, if you needed directions, you would actually have to ask a local? But when his cell phone was eventually replaced with one that had international access, the only distance between us and a workplace crisis could be measured by changes in time zones. There, you could at least justify postponing return calls until some reasonable hour. My already inborn desire to travel far afield was only heightened by this.

Internet cafes started popping up, so in Barcelona, for example, we climbed 3 stories in an old building to pay buy the minute to send an email home to assure everyone we were actually in Barcelona, safe and having fun. I believe this is when travel began to tip for us. Before this time, the only contact home during trips abroad was in event of a problem, yet from this point forward no contact from abroad would signal cause for concern. And just as it became customary for family to expect communication during travel, so too did the office.
Finally, it arrived. A pocket-size coup d’etat to all my secret travel whims. It received calls in any country, received and sent email, administered auto-notifications of processes gone awry, and even came with adapters to recharge it in every electrified nation on earth. Life, and travel, would never be the same again. 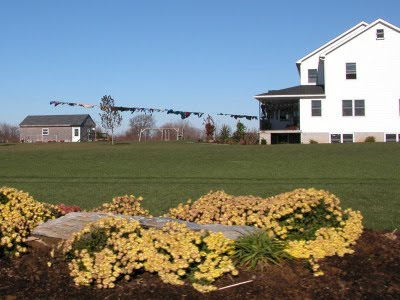 Some time later, with our first baby in tow, we were touring a “typical Amish house” in Lancaster County, Pennsylvania, and learning more about the Amish culture and beliefs (I believe this was in Bird-in-Hand). During the visit, I discovered a few surprising things about these people that still come back to me on an almost-weekly basis. For one, the Amish today don’t generally sit around by candlelight in the evenings, but use generators and gas-powered lights—the point to them being not that they live as if it were 150 years ago, but rather that they live off-grid and independently. They also have no problem with riding in cars, they just choose not to own them. Similarly, they make no qualms about placing phone calls to friends or loved ones, or especially in the case of emergencies, they just choose not to have a telephone in their homes.
To the Amish, the home is a sacred place. Its sacredness is protected by limiting the number of outside distractions that might turn attention away from fellow family members, the daily rituals of maintaining house and home, and the time spent together there. As I stood in the “typical Amish kitchen,” where the Amish newspaper sat alongside of some needlework crafts for the girls in the family, it occurred to me that family travel was our sacred time together. The only way we could really limit the outside distractions turning our attention away from each other and the other things we held sacred was to get on an airplane where everyone, like it or not, had to turn off those electronic devices—at least for a while. Or to head into the woods and pitch our tent where cell towers couldn’t reach us. It was the sacredness of these times together that made me fight fiercely to keep travel a regular part of our lives, and to create a guide that would help other new parents get away and have a similar experience with their children. 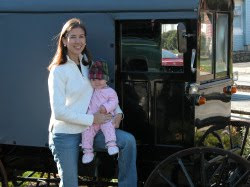 We are people of our time, however, and for many of us our lives and livelihoods have been built upon these new technological realities. As a stay-at-home, work-at-home mom, I constantly juggle my career and parenting opportunities afforded me by this ability to work entirely out of my home and on my own schedule—something I wouldn’t trade. What this means, however, is that our home is about as far from Amish as you can get. We just welcomed the fourth computer into our home (not counting the Leapster) and sometimes have 3 computers on simultaneously, plus a cell phone, PDA, and internet phone. Our home is completely wired, and wireless. As you look around it’s easy to see that the “daily rituals of maintaining house and home” are often neglected in favor of maintaining website and blog, if not writing book and email.

Still, these are petty excuses to justify the expense—and need for travel. Even a “staycation” may prove more fulfilling if we could just power down, disconnect, and forget about Facebook for a while. We had a great opportunity to do just that about a year ago when a great storm swept through the Bay Area and knocked out our power for 17 hours straight. Happily, I could not even recharge my dead cell phone. We lit candles and made one of the first fires in our fireplace at this house. I read some of my favorite childhood poems to the kids. I cooked using only the gas burners on the stove. We had a blast. The kids wanted to do it again the next week and a part of me actually considered the possibility. It was with a twinge of sadness that I first logged in to check the email after our sacred and distraction-free time out. 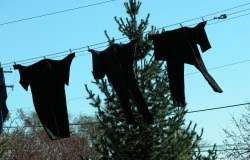 While I’m not ready to part with my car, phone, or the tools that help me keep career-and-home (not any time soon anyway), I have taken some measures to limit the amount of time I let technology dictate my day. For example, a few months ago I subscribed to the weekend edition of the New York Times—in paper. At first my hubby was appalled and suggested I cancel immediately since I can simply read it online, and only the parts that interest me, as he does on his PDA. But when I explained that I didn’t need one more thing to do in front of a computer, he nodded with a little smile. I also try to turn off the computer—off completely—at least two hours in the middle of each day so that even the temptation to quickly check email as I pass by doesn’t get the best of me. And I’ve tried to make it apparent to friends and family to always call my home phone first—so when I’m home and don’t need to be reached by it I can shut my cell phone gloriously off.

When I leave home? I admit more electronics make it into the car than they used to. But let’s just say don’t expect to “find me on Facebook.”

Do you consider technology to be an enhancement or a distracter when you travel? Do you think it cuts into your sacred time together as a family? Will you unplug during an upcoming family vacation—at least for a little while?

This post is part of Photo Friday at DeliciousBaby.com.

Shelly Rivoli, author of the award-winning guide Travels with Baby
The Ultimate Guide for Planning Trips with Babies, Toddlers, and Preschool-Age Children
https://travelswithbaby.com/

Tips for traveling by ferry from Puntarenas to...